The Founding of Pacific Lodge No. 50 A.F. & A.M. dates from June of 1870. Masonry in   Salem had been represented for the 18 years prior by Salem Lodge No. 4, but with Salem growing rapidly in the 1870s, a group of Masons headed by Worshipful Brother Frelon Jesse Babcock decided it was time for a second blue Lodge in the City.

Brother Babcock had come to Salem from St. Johnsbury, Vermont, where he received all of the degrees of American or York Rite. Soon after his arrival in Oregon he was active in ritualistic work in all of the Masonic bodies of the State In 1870, Brother Babcock together with Brothers B.F. Brown and J.A. Waymire attended the annual Grand Lodge Communication at Astoria and asked that a charter be granted to a suitable number of brethren residing in Salem. A charter was granted to Pacific Lodge No. 50 naming as its founding officers, F.J. Babcock as Worshipful Master, B.F. Brown as Senior Warden and J.A. Waymire as Junior Warden. Pacific Lodge No. 50 had an active membership of more than 500 members and has numbered among them many men who have been and still are prominent in Masonic and civic affairs.

Brother Babcock served as Grand Secretary for nine years, six of our members have been Grand Masters. On the lodge's roles are the names of Governor Oswald West, U.S. Senators Charles L. McNary and Mark Oden Hatfield, and State Representative John Minto.

In December of 1904 Salem Lodge No. 4 and Pacific Lodge No.50 bought a lot on the corner of High and State Street. Its price was $5,500 which was paid with $1,000 down and the balance through a loan from Ladd and  Bush Bank. Eight years later, the Lodges had a contract for construction of a new Temple In January of 1912, ground was broken for the new Masonic Building. Grand Master George Burnett opened the Grand Lodge of Oregon for the purpose of laying the cornerstone. More than 300 Masons attended the ceremony. The Masonic Building was designed by University of Oregon School Architecture founder and first dean Ellis F. Lawrence. Work progressed rapidly, and by January of 1913, Salem Lodge No.4 and Pacific Lodge No.50 had moved into their new home. The total cost of the seven storied basement structure was $108,000.

To finance the construction, the Lodges borrowed money by a direct loan, and floated a bond issue. As set up, the Lodges reserved the fifth, sixth, and seventh floors for their use. The first four were developed as rental space for other businesses. During the time of the construction, Salem Lodge No. 4 held their meeting at Capital Masonic Temple and Pacific Lodge No. 50 held their meetings at the Scottish Rite Temple. Both Lodges have always been grateful to those organizations for their brotherliness in inviting them to share their facilities.

A favorable financial picture did not prevail for the Masonic Building until 1919, with all of the commercial spaces finally being rented. But in the 1920's, rental problems arose due to an economic downturn. Matters worsened when the Great Depression cast its gloomy shadow over the decade. Many tenants vacated in favor of cheaper quarters. Sadly, it took a disaster to help solve the Lodge's financial woes. In the winter of 1935, a fire destroyed Oregon's State Capital leaving state government with some serious problems, none the least the crucial need for office space. As a partial solution a lease agreement was put in place, granting the state use of the fifth floor. The added revenue enabled the Lodges to pay off the building loan and retire the bonds in 1943. This left the lodge free of all financial debt.

The Masonic Temple in Downtown Salem Oregon was sold in 1972 with both Lodges moving out during the summer of the following year. At that point tentative plans were already in the mill for a new temple, with the expectation of renting meeting space until it's completion. The reason for disposal of the property was the expected expense of renovating the building to satisfy safety standards and operational requirements. The end of an era came in June 1972, when the Masonic Building was sold to Benjamin Franklin Federal Savings & Loan Association for $362,000.

Both Lodges moved into the new building where we still today continue to serve the Craft and community. Today, the Grand Master has issued an edict suspending degree work until the COVID-19 threat has passed. Pacific Lodge No. 50 has 68 Master Masons on the Lodge roles and one Brother finishing up his Master Mason proficiency. The members of the Lodge are looking forward to the virus passing and hopes to soon be able to carry on the Lodge tradition of raising men into our ancient and honorable order. Salem Lodge No.4 has always been a helping hand to the Lodge and we appreciate the many years working together in the craft. The Members of Pacific Lodge No.50 thank the Grand Lodge of Oregon for their continued support. 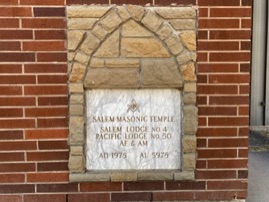